I love this frilly black sweater and I’ve wore it several times with jeans. However, as part of my October quest to wear my clothes in new ways, this is my first attempt at wearing this sweater with a dress and boots.

I bought this blue jacket more than a year ago, but I haven’t managed to get it into the rotation of clothes that I wear regularly. I’ve learned that it goes well with dark jeans and scarves. Now that fall is here and winter is coming, I’ll have more opportunities to get this jacket out of the closet. 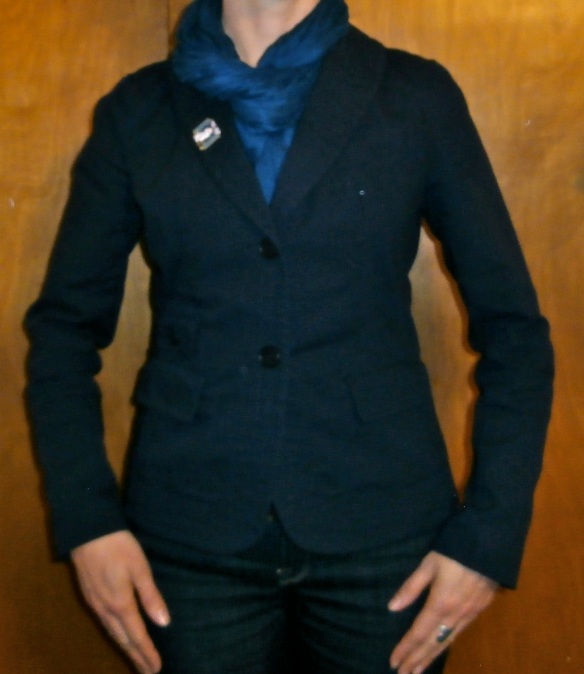 Read Part I (How It Began) if you desire.

I have finished reading this book:

The Complete Works of William Shakespeare.

It turns out that some of the comedies aren’t that funny, the histories (all those Henrys!) are a whole lot better than I thought they’d be (shout out to King Henry the IV and King Henry the V),  Julius Caesar was just as good as I’d remembered from tenth grade, the tragedies are tragic, and Hamlet is still perplexing.

I originally figured that it would take me three years to read The Complete Works, but I picked up momentum after I made it to Julius Caesar in the spring of 2013—and it was utter serendipity that I read it in March. “Beware the ides of March,” the soothsayer said (soothsaid?).

Conquering the long goal is satisfying. I’m learning to look, think, and plan farther into the future in my goal-setting.

And, “Neither a borrower nor a lender be: for loan oft loses both itself and friend;” is good advice.

So yes, after three years, I will return The Complete Works to my sister, from whom I borrowed it.

Here are a few of the things I wore as part of my project to “shop my closet” closet during the month of October: 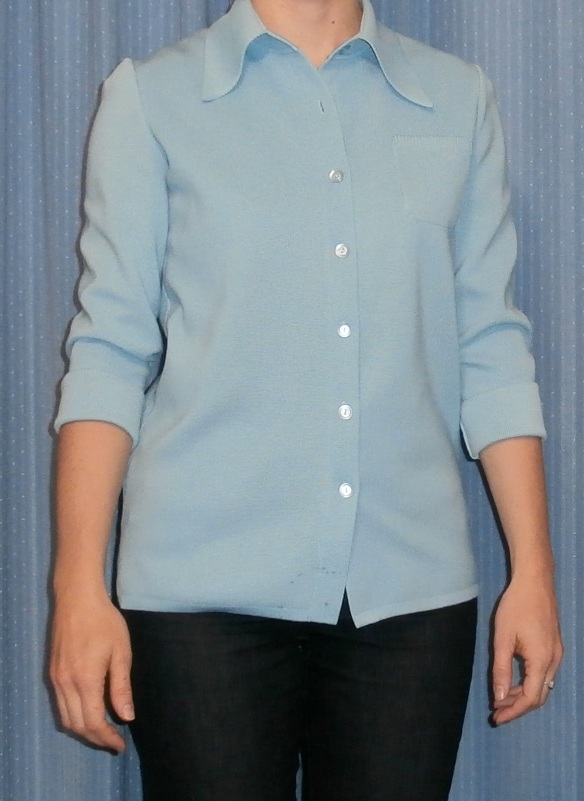 I love the sharp collar points on this awesome polyester jacket that belonged to my late grandmother. This jacket is older than I am and it is in great condition!

This necklace also belonged to my grandmother. Judging by the jewelry collection she left, she really loved turquoise. Fortunately, it’s a color that I enjoy too. The two things I like about this necklace: the Celtic-style knot and the length-adjustable clasp. 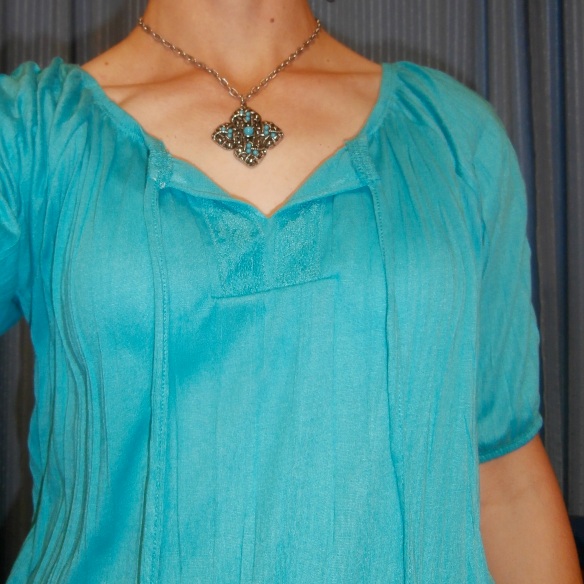 And lastly, I  found that great blouse at a local thrift store for three dollars just last week. Now that it’s in my closet, I will make a definite effort to wear it often.

I am not naturally gifted with fashion talent and it’s all too easy for me to fall into a boring routine of wearing the same clothes over and over at home and work, although I usually make an effort to dress up for church and social events.

Thus, in honor of October, the month of Halloween costumes and dressing up fun, I decided to make an effort to stretch my imagination and wear more of the clothes I already own that haven’t been worn in a while and to wear them in new ways.

So, here is October Outfit Number 1 (and please pardon my inadequate photography skills): 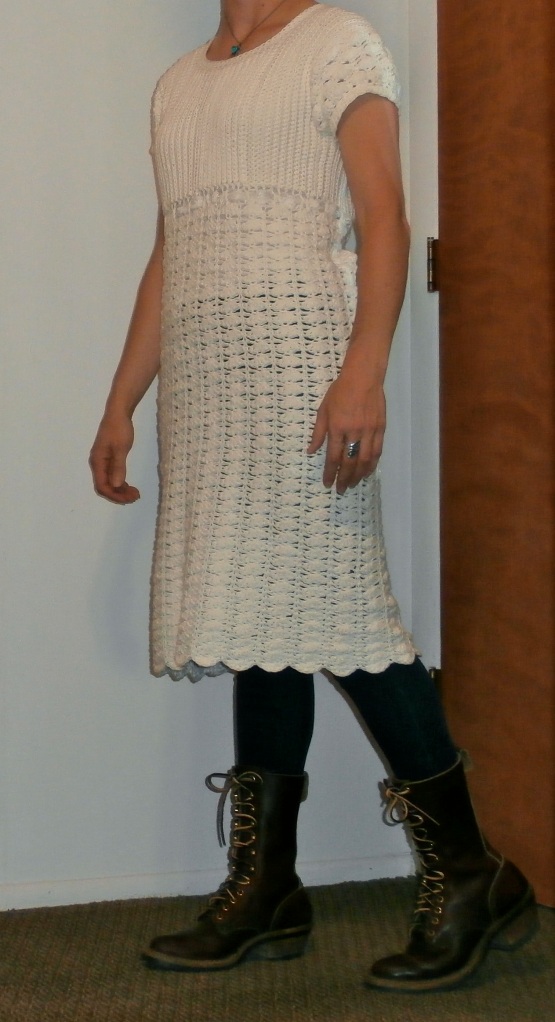 I made this cotton-wool tunic dress last year and I love it, but I haven’t had the chance to wear it much since it was spring when I finished it and my summer shorts and sandals beckoned. So, this dress has been folded up with my sweaters waiting for fall weather to arrive.

Also, because I don’t currently own a horse, my fabulous riding boots have been gathering dust in the closet for the past few years. However, I discovered that they look pretty good with jean leggings. Until the current skinny jean trend arrived, and I actually went out and bought some skinny jeans and leggings, it never occurred to me to wear my jeans under my riding boots instead of over them.