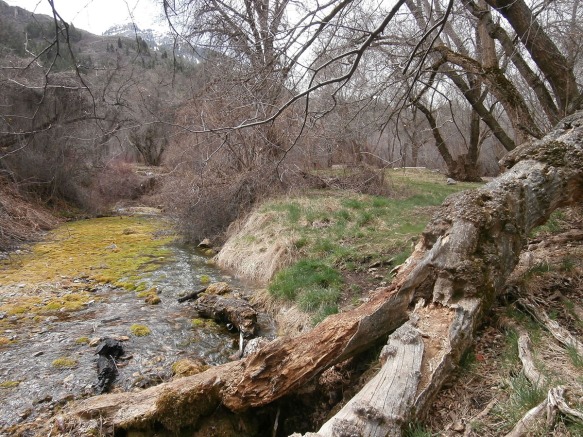 Every time I see the first bright green hues of spring, I’m reminded of this poem by Robert Frost:

Nature’s first green is gold,
Her hardest hue to hold.
Her early leaf’s a flower;
But only so an hour.
Then leaf subsides to leaf.
So Eden sank to grief,
So dawn goes down to day.
Nothing gold can stay.

Spring passes quickly into summer here in the Mountain West, so I have to make a deliberate effort to enjoy the season—and get out on the trails to see the tender young grasses, bright willows, dogwoods, and mosses, budding and blossoming trees, and cheerful wildflowers. 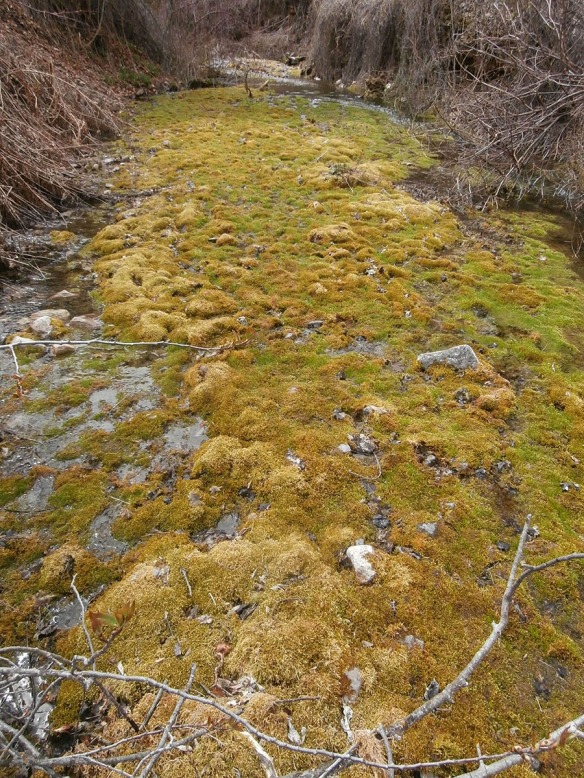 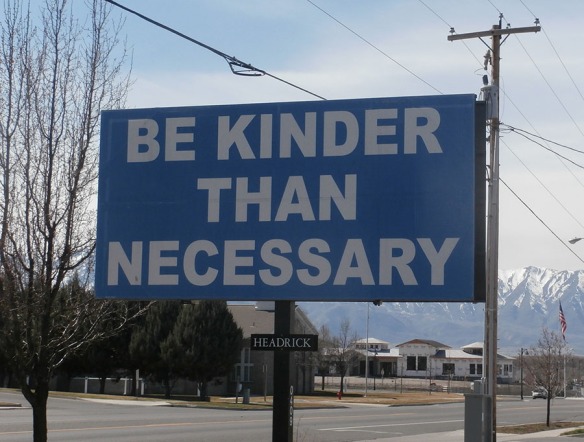 Thanks again to Sir Walter Scott, I learned a vast number of new words while reading his novel The Monastery. An exceptionally small sampling follows.

A paronomasia is a play on words, especially a pun. (Dictionary.com)

A clachan is a small village or hamlet. (Dictionary.com)

A cruive is a kind of weir or dam for trapping salmon; a sort of hedge formed of stakes on a tidal river or the sea-beach, for catching fish; or a hovel. (Wordnik.com)

To be bodin is to be summoned or requested to appear in arms. (Dictionary of the Scots Language)

In Scots law, effeir means to be suitable or to belong. An effeir is also that which belongs or is becoming to one’s rank or station. An effeir is a property, quality, state, or condition. (Wordnik.com)

To obnubilate is to cloud over, becloud, darken, or obscure. (Dictionary.com)

A harquebusier is a soldier armed with a harquebus, which is a term for any of several small-caliber long guns operated by a matchlock or wheel-lock mechanism, dating from about 1400. (Dictionary.com)

I saw this sign listing the rules for off-leash dogs at a local nature park and the copyeditor in me could not resist!

Every few years, I re-read Till We Have Faces, the last novel written by C. S. Lewis, which was published in 1956.

Reading this tough, gritty novel lays me open and causes me to see my own heart clearly for a time, as cloaked pride and selfishness naturally arise there as part of my natural self.

The novel is a retelling of the Ancient Greek myth of Cupid and Psyche presented from the perspective of a woman named Orual, who is Psyche’s sister. It abounds with piercing, thought-provoking quotations.

In the novel, Orual relates her experiences with her sister Psyche and writes a book documenting her complaint against the gods, whom she accuses of being unjust and cruel. So strongly is she compelled to write her complaint that she declares:

“I was with book, as a woman is with child.”

And throughout her story, Orual makes many biting observations about the cruelty of the gods:

“I was not a fool. I did not know then, however, as I do now, the strongest reason for distrust. The gods never send us this invitation to delight so readily or so strongly as when they are preparing some new agony. We are their bubbles; they blow us big before they prick us.”

“Now mark yet again the cruelty of the gods. There is no escape from them into sleep or madness, for they can pursue you into them with dreams. Indeed you are then most at their mercy. The nearest thing we have to a defence against them (but there is no real defence) is to be very wide awake and sober and hard at work, to hear no music, never to look at earth or sky, and (above all) to love no one.”

“There must, whether the gods see it or not, be something great in the mortal soul. For suffering, it seems, is infinite, and our capacity without limit.”

Eventually when she finishes writing her book, Orual is able—in a dream or a vision—to confront the gods with her complaint.

“The change which the writing wrought in me (and of which I did not write) was only a beginning; only to prepare me for the gods’ surgery. They used my own pen to probe my wound.”

As she stands before a judge in the courtroom of the gods, Orual begins to see that her own motives were not what she thought them to be.

“Read your complaint,” said the judge.

I looked at the roll in my hand and saw at once that it was not the book I had written. It couldn’t be; it was far too small. And too old—a little, shabby, crumpled thing, nothing like my great book that I had worked on all day, day after day, while Bardia was dying. I thought I would fling it down and trample on it. I’d tell them someone had stolen my complaint and slipped this thing into my hand instead. Yet I found myself unrolling it. It was written all over inside, but the hand was not like mine. It was all a vile scribble—each stroke mean and yet savage, like the snarl in my father’s voice, like the ruinous faces one could make out in the Ungit stone. A great terror and loathing came over me. I said to myself, “Whatever they do to me, I will never read out this stuff. Give me back my Book.” But already I heard myself reading it…

There was utter silence all round me. And now for the first time I knew what I had been doing. While I was reading, it had, once and again, seemed strange to me that the reading took so long; for the book was a small one. Now I knew that I had been reading it over and over—perhaps a dozen times. I would have read it forever, quick as I could, starting the first word again almost before the last was out of my mouth, if the judge had not stopped me. And the voice I read it in was strange to my ears. There was given to me a certainty that this, at last, was my real voice.

There was silence in the dark assembly long enough for me to have read my book out yet again. At last the judge spoke.

‘Are you answered?’ he said.

The complaint was the answer. To have heard myself making it was to be answered. Lightly men talk of saying what they mean. Often when he was teaching me to write in Greek the Fox would say, “Child, to say the very thing you really mean; that’s the whole art and joy of words.”

A glib saying. When the time comes to you at which you will be forced at last to utter the speech which has lain at the center of your soul for years, which you have, all that time, idiot-like, been saying over and over, you’ll not talk about joy of words. I saw well why the gods do not speak to us openly, nor let us answer. Till that word can be dug out of us, why should they hear the babble that we think we mean? How can they meet us face to face till we have faces?”

What she thought was righteous anger at the gods for stealing Psyche from her was actually possessive anger and jealousy that the gods chose Psyche and that Psyche chose the gods. Orual finds herself speaking from her heart-of-hearts in the presence of the gods.

“Oh, I can see it happening, age after age, and growing worse the more you reveal your beauty: the son turning his back on the mother and the bride on her groom, stolen away by this everlasting calling, calling, calling of the gods. Taken where we can’t follow. It would be far better for us if you were foul and ravening. We’d rather you drank their blood than stole their hearts. We’d rather they were ours and dead than yours and made immortal.”

In moments when she is most honest with herself, Orual makes these observations:

“It may well be that by trickery of priests men have sometimes taken a mortal’s voice for a god’s. But it will not work the other way. No one who hears a god’s voice takes it for a man’s.”

“It now seemed to me that all my other guesses had been only self-pleasing dreams spun out of my wishes, but now I was awake.”

And before her death, Orual tells the gods:

“I ended my first book with the words ‘no answer’. I know now, Lord, why you utter no answer. You are yourself the answer. Before your face questions die away. What other answer would suffice?”