It’s always nice to see a smiling face when one is out and about. 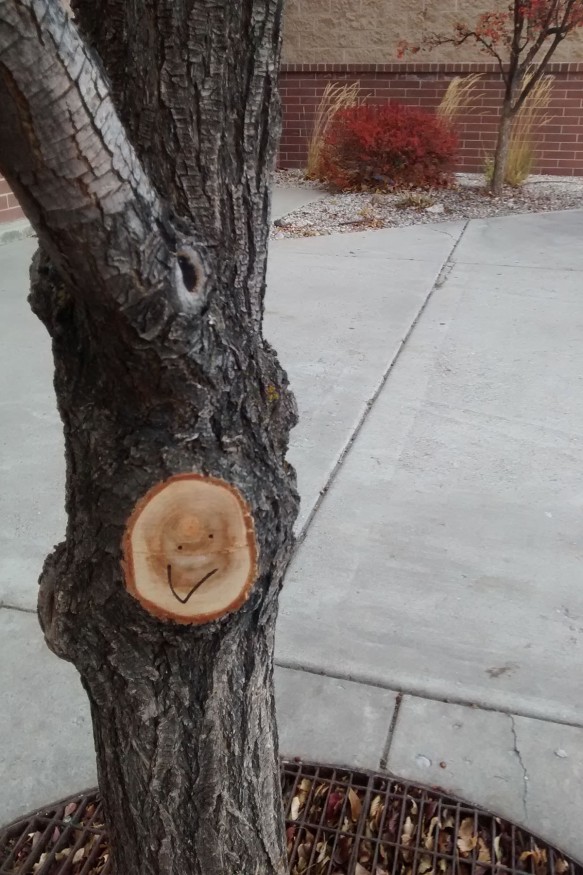 I’ve been enjoying the spirit of autumn these past few weeks. I went for a few dirt-road drives in the mountains to see the gorgeous red and yellow fall color on the bigtooth maples and the quaking aspens.

Looking at photos of fall scenery somehow led me to look up autumn-themed poetry! These are both poems about fall that I’d never encountered before.

Bending above the spicy woods which blaze,
Arch skies so blue they flash, and hold the sun
Immeasurably far; the waters run
Too slow, so freighted are the river-ways
With gold of elms and birches from the maze
Of forests. Chestnuts, clicking one by one,
Escape from satin burs; her fringes done,
The gentian spreads them out in sunny days,
And, like late revelers at dawn, the chance
Of one sweet, mad, last hour, all things assail,
And conquering, flush and spin; while, to enhance
The spell, by sunset door, wrapped in a veil
Of red and purple mists, the summer, pale,
Steals back alone for one more song and dance.

When the Frost is on the Punkin by James Whitcomb Riley

The husky, rusty russel of the tossels of the corn,
And the raspin’ of the tangled leaves, as golden as the morn;
The stubble in the furries – kindo’ lonesome-like, but still
A preachin’ sermons to us of the barns they growed to fill;
The strawstack in the medder, and the reaper in the shed;
The hosses in theyr stalls below—the clover overhead!—
O, it sets my hart a-clickin’ like the tickin’ of a clock,
When the frost is on the punkin and the fodder’s in the shock!

Then your apples all is gethered, and the ones a feller keeps
Is poured around the celler-floor in red and yeller heaps;
And your cider-makin’s over, and your wimmern-folks is through
With their mince and apple-butter, and theyr souse and sausage, too!
I don’t know how to tell it—but if sich a thing could be
As the Angels wantin’ boardin’, and they’d call around on me—
I’d want to ‘commodate ’em—all the whole-indurin’ flock—
When the frost is on the punkin and the fodder’s in the shock!

This woman is living the (Mr. Darcy) dream!